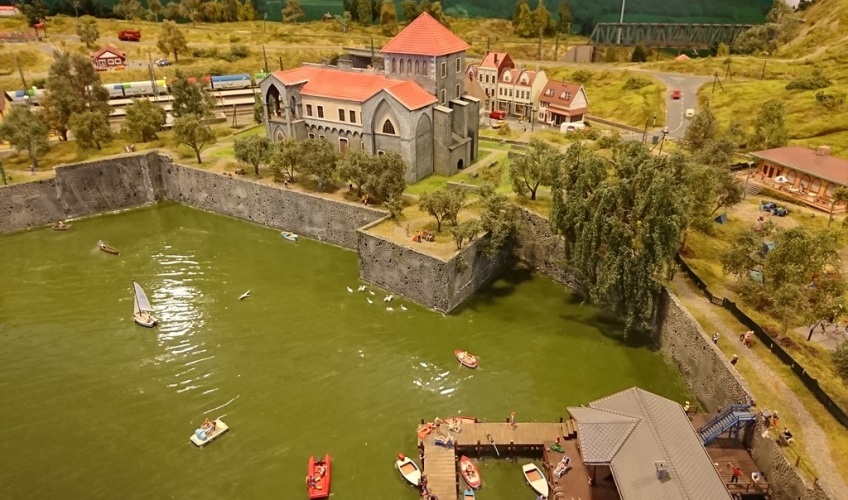 One morning we decided to go to the Hungarian National museum. But it turned out to be closed that day. Which was weird because I’ve checked opening hours in the internet, and it was supposed to be open. We didn’t have any specific plans, so we stared thinking what else we could do today. And then I remembered reading reviews about the historical Metro Line 1 (yellow M1, also known as Millennium Underground), the oldest metro line in Budapest, and the second oldest in the world (opened in 1896).

So, we decided to check it out. And in my opinion, we made a right choice! It was much more interesting and exciting than a modern metro. Also, thanks to that mini-trip we ended up in the Heroes’ Square:

It’s located next to the City Park, Museum of Fine Arts and Budapest Hall of Art (contemporary art museum and a historic building):

After few shots we continued our journey. We took the same metro line M1 and went to Opera station.

I sat down on a bench and looked around… Funny thing, I had a feeling that I am a time traveler. And judging by the station interior I travelled 100 years back in time. It felt so real that I would not be even surprised to see passengers dressed up in the latest 1910’s fashion. I could easily spend here few hours, just gazing and analyzing every detail; imagining people from the beginning of the 20th century coming here and thinking where they were heading… But half of the day was already gone, and we had to go if we wanted to see more of Budapest.

This neo-Renaissance opera house (previously known as the Hungarian Royal Opera House) was opened to the public in September 1884. Today Hungarian State Opera House is the second largest opera house in Hungary.

We were walking down the street when we noticed an ad stand advertising a miniature world Miniversum. “3 countries on 300 square meters, 100 times smaller than the real world! One of world’s largest model layouts: 5000 minifigures, 1300m meters of rail track, 14 towns, 600 buildings, 100 trains in motion”.

I’m obviously not Sheldon Cooper from The Big Bang Theory, nor am I a five-year-old… But as soon as I saw this add, I turned to both of them… “Model trains! Model trains! We gonna see the model trains!” the voice of obsession was screaming like a crazy inside my head.

You see, when I was little, I dreamt about a model train that would go around our Christmas tree every year. I never got it. So, visiting Miniversum was a dream coming true… in a way. But on a much bigger scale.

What’s so amazing about this place is that you can use dozens of interactive buttons to bring to life all sorts of actions, sounds and light effects.

Looking at other visitors (grown-ups) playing with the buttons, trying to figure out what they have put into motion, I’ve realized that I am not the only one acting like a curious child. And just like them I was laughing and pressing all the buttons.

Without a doubt, Miniversum is a Time Machine! As soon as you get here, you’ll leave the adult version of yourself outside the doors and in comes a kid that doesn’t want to grow up. What do you know, Neverland exists after all!

Forgot to mention, entrance is around 8 euro and you’ll get a discount with a Budapest City Card.

Rest of the day we spent walking down the Danube Promenade:

Our holiday was coming to the end, and I wanted to do something special. I wanted to go on a riverboat cruise! It probably wasn’t the wisest thing to do when you have a limited travel budget… but I knew for sure that I will regret it if we won’t do it. So, we came to the pier and compared the prices (there are different types of cruises available). One of the cheapest was the 1-hour Night Sightseeing cruise with audio guide and a welcoming drink (if I’m not mistaken, it was possible to choose between wine, beer, sparkling wine and some lemonade). We also got a nice discount thanks to the Budapest City Card.

Long story short… it was awesome! Definitely worth the money we spent on it! And I have learned one more thing during this river trip… Budapest is absolutely stunning not only in the day time, but also in the night.

Hungarian Parliament building is one of the main Budapest attraction. Well, to be honest I’ve got an impression that half of Budapest buildings are main city attractions. I’m exaggerating of course but just a little, I think. Unfortunately, we haven’t had time to visit the Parliament building; as they say: so many sights, so little time.

On the one hand, I am sad because it was impossible to see everything within our time limit. But on the other hand, I know for sure that we’ll have to (and we’d love to) come back here again. And we’ll add all those things that we haven’t seen, and all of those places that we haven’t visited to our Budapest Bucket list.

4 thoughts on “What Budapest has to offer. Part 2”